Holmes & Flinders are two unique atolls which lie a mere 50NM apart from each other off the coast of Far North Queensland, Australia. Holmes is approximately 115NM East Northeast of Cairns and Flinders is 50nm to the South West. Our focus here is predominately on Dogtooth Tuna, targeting them primarily on topwater and then on the jig.

Holmes Reef is named after the young Captain Henry Holmes whose ship, the Thomasine, sank here on route to Hong Kong at a time when the reef was uncharted. Happily, Holmes and most of his crew survived. The location of these atolls is what makes them so special. They sit right in the middle of the east Australian current which is running down the coast and with it bringing a plethora of pelagic species. They are also home to the breeding aggregations of GT, s we call mobile bommies during the right time of year. You can expect to catch a wide variety of species out at these locations from GT’s, Wahoo, big Doggies and Yellowfin, Bluefin, black jacks and the list goes on. If the weather permits or the fishing leads us to flinders here is a little info for you.

It was Matthew Flinders who named the reef, the Great Barrier Reef as he travelled north for a second time after one of his ships ran aground on Wreck Reef the made a safe passage through the reef still called Flinders passage today. The reef has a decent size sand cay which also offers anglers the option for a land-based walk and stalk for fish cruising close by the cay. The smaller reef to the south known as South Flinders is also a great option to run to when the weather permits. These areas see large Yellowfin busting up on the surface quite consistently. Along the reef edges you’ll find the usual Coral Sea critters such as Dogtooth, Long Nose Emperor, Large Trout, GT’s and Wahoo.

This trip Is primarily focused on targeting Dogtooth Tuna, however we do encounter many other species on this trips as bycatch and when we do catch GT’s they are generally oversized. Anglers should be equipped and prepared for heavy casting and heavy jigging throughout the trip. 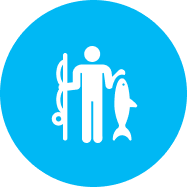 If you don’t have your own gear, don’t worry!! We have extremely high end gear available to our guests for hire, it is a one-off fee for the duration of the trip. We make sure it is maintained and kept up to the condition it needs to be to stop those giants. Our rods are ASWB Indian Pacific GT Tamer PE 8-10 rods, paired up with a Shimano 18000SW Saragosa and spooled with 100lb P8 braid by Platypus fishing lines. The light outfits are also ASWB PE 4-5 outfits paired with Shimano Saragosa 6000SW spooled with Platypus P8 50lb braid.

Have experienced 2 Offshore sport fishing trips this year with Nick at East Coast Angling, 5 days out of Cooktown and 5 days out of Port Douglas. East Coast Angling is a professionally run organisation with excellent equipment and along with the experience and knowledge of Nick we were put onto some large fish in some very difficult conditions. I have no hesitation in recommending East Coast Angling to anyone who enjoys the challenge of offshore sport fishing for large species of fish that inhabit the reefs of FNQ.
Brian Lay
I can't recommend East Coast Angling enough for the service professionalism knowledge and courtesy with my two young boys we had the best day ever and caught so many different fish including a shark we will be sure set to another charter when we return one day in the near future thanks so much.
John Brimacombe
Honestly cannot recommend the East Coast Angling guys enough! Karl was an absolute legend! He may look like he has no hairs on his chest but he has been fishing the reef since he was 18. His experience, knowledge and most importantly patience was second to none! Constantly encouraging us to keep slogging away and targeting important areas for the bangers! For me personally I ticked off a huge chinaman however not the GT I was after! I will be back! Thank you so much again Karl for the day! Your a true professional mate!
Jacob Every
Another amazing trip with East Coast Angling, these guys really go out of their way to make sure you are happy on and off the water. We did the Port Douglas Offshore charter and what a great location to visit and call home for a week of fishing. The accommodation and night life in Port Douglas is great with plenty of nice restaurants and bars to enjoy. The charter the guys at East Coast Angling run is one to be experienced, the boat Scutes, a 32 foot centre console is a beast and fishing from its platform all day is something every fisho should enjoy. Backing up the beautiful boat is Nick's Knowledge and experience of the reefs, he and his team will go to all lengths to try and put you on the fish, time and time again. If you looking for an operation that care about their clients and provide a first class service, look no further then Nick and Megan at East Coast Angling. You will not be disappointed.
Robbie Kirkwood
The crew at East Coast Angling went over and above to make sure everyone in our group was catered for. The boat is immaculate and crew were very knowledgeable on the area to maximise our opportunities on quality fish.
Nick Ham Smith
Had an epic day fishing with Nick at East Coast Angling! He put us on the fish and we were able to land 7 different species. The popper action was unbelievable and something we rarely see back home in San Diego. Thanks Nick for the amazing experience!
Sam Catch
Great week with professional and knowledge crew, the boat and equipment is outstanding. Caught some excellent fish and will be back for sure.
Simon Koawalinski
Nick took my son and I out. Such a great guide and experience on GBR is amazing. Did some popping and reef bashing. Smile on son's face pulling in some great species worth every cent.
Anthony Kravanski
I can't recommend ECA highly enough. Great service from Megan when booking your trip and Nick is easily one of the best fishing guides on the GBR. Do yourself a favour and experience some world class top water action with ECA.
Paul Finlay
Previous
Next

So You're Keen? Secure Your Spot!